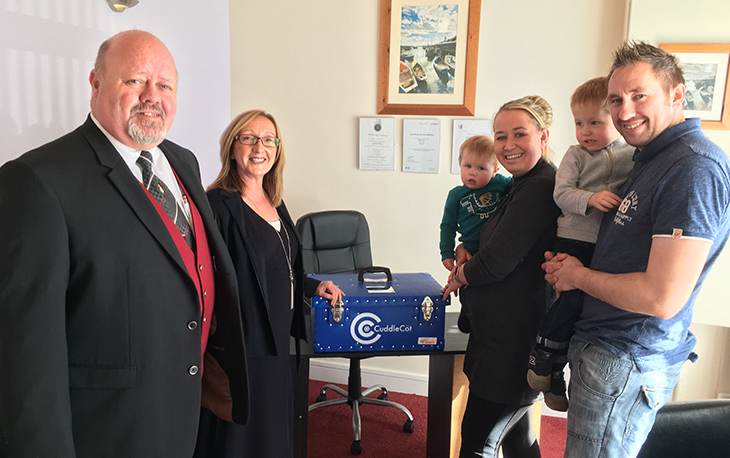 A family from Wallsend who lost their one-year-old twin son Danyl have donated a cuddle cot to Daren Persson Funeral Services to help other bereaved families.

Danielle and Kevin O’Shaughnessy discovered that Danyl had a severe heart defect when they were expecting him and his twin brother Dylan.

Initially Danyl wasn’t expected to survive pregnancy and when he was born the family only expected to spend a few days or weeks with him. But their little fighter celebrated his first birthday and, when he died in his Mum’s arms ten days later, his death came as a shock.

Danielle explained: “We had been told that we would see his condition deteriorate but in the end it was quite sudden. We were provided with a cuddle cot by the child loss charity 4Louis and it made a huge difference.

“It allowed us time with him in the house to process what had happened. He stayed with us for four days after he died, it was like he was just asleep and it helped us to move forward. It also helped that family members could come and have one last cuddle.”

After Danyl’s death, Danielle and Kevin decided to raise funds for two cuddle cots. They had already been fundraising for St Oswald’s Hospice, which provided counselling for the family. In total they have raised almost £6,000.

Accompanied by Dylan and his older brother Oliver, the couple presented a cuddle cot to Daren Persson Funeral Services North Shields branch last week, and the other cot has been provided to the local community nursing team. The cuddle cot system uses a cooling mechanism to maintain a baby’s condition after they have died.

Funeral Partners Area Development Manager Heather McBeth, who attended the presentation, said: “We would like to thank Danielle and Kevin for this kind donation to help other families in memory of their beautiful little boy. I am humbled by the family thinking of others after the tragic loss of their baby son.
“We will be able to loan out the cuddle cot, or it can be used in our funeral homes, to allow families a little extra time with their baby to help them during the grieving process.”
Danielle is continuing to fundraise for 4Louis while Kevin and his 20-strong ‘Team Danyl’ will take on the Great North Run to collect funds for St Oswald’s Hospice, see https://www.justgiving.com/fundraising/danielle-oshaughnessy4 and https://www.justgiving.com/fundraising/danyl-kevin-james

Have you found what you are looking for today?